Our nation has a long, but largely unrecognized, history of courageous Americans who have opposed U.S. aggression, violence, and war. The US Peace Memorial Foundation honors Americans who stand for peace by (1) publishing the US Peace Registry, (2) awarding the annual US Peace Prize, and (3) fundraising, planning for, and constructing the US Peace Memorial in Washington, DC. The first two projects are ongoing and well developed. It is time to advance and fully develop the concept of the memorial as a permanent national monument engraved with quotes from well-known Americans and equipped with electronic access to information about the people and organizations we honor.

The monument will make it clear to our citizens that advocating for peaceful solutions to international problems and opposing war are honorable endeavors. A national monument to peacemakers can further raise awareness of these activities and help to change our cultural mindset so that it will no longer be acceptable to label those who speak out against war as un- American, anti-military, disloyal, or unpatriotic.

Just as you see military veterans at war monuments talking to young people, the US Peace Memorial will serve a similar function of uniting generations. Once the monument is built, it will be harder to disparage those who oppose war. When criticized, a person could say, “Don’t you know there is a national monument dedicated to people just like me?”

Children are not taught about the U.S. peace movements that have existed at various stages in our country’s development, our antiwar history, and the heroic leaders. Most middle school and high school U.S. history texts neglect the topic entirely. Once the monument is built, perhaps a photo will be included in a textbook, later a paragraph, and eventually an entire chapter about working for peace.

Before beginning our project in 2005, we conducted an exhaustive online search for peace memorials and monuments. The results were disappointing. In many U.S. cities you will find “peace monuments” that are actually memorials to a war or to the war dead. For example, the Perry’s Victory & International Peace Memorial in Lake Erie, the Peace Monument on the grounds of the Capitol that commemorates naval deaths during the Civil War, and the Eternal Peace Flame in Gettysburg which commemorates a battle and is surrounded by guns. Peace memorials in the U.S. tend to reinforce the concept that “you earn the peace by winning the war.”

Although several other countries have peace memorials that could serve as a model for one in the United States, none are focused on the U.S. peace movement. The U.S. has some as well, but all are local and not national monuments. These include the Peace Memorial Park, Portland, OR; Peace Garden at Fresno State University, CA; the Lyndale Park Peace Garden in Minneapolis, MN; the Peace Plaza in Salem, OR; Peace Garden in Harrisburg, PA; Prairie Peace Park in Lincoln, NE; and The Pacifist Memorial, Sherborn, MA. Also of note is the Dayton International Peace Museum, in Dayton, OH.

Nothing exists in the U.S. that could be considered a national peace memorial. There is only one US Peace Memorial Foundation and only one plan to build a national monument to recognize and honor those who have opposed U.S. war(s) and/or proposed peaceful alternatives to war. The monument as it is envisioned will have significant artistic merit that will honor and inspire the ideals of peace. The US Peace Memorial will be a major piece of art that will attract visitors for the beauty of its architecture as well as for its message. Much as the structures of the Vietnam Veterans Memorial and the Martin Luther King Jr. Memorial are effective in commemorating their respective histories, the quality of the peace memorial’s unique configuration will bring national and international attention to the broad spectrum of peace efforts by Americans and U.S. organizations.

No design decisions are likely until we have successfully completed the initial fundraising campaign. At that point, there will be a nationwide call for ideas and proposals. Our Founding Members will be consulted about the physical design and will also be instrumental in considering the options presented. Members are invited to submit ideas and sketches now, before being involved in choosing the final architectural design.

Early on, potential donors expressed interest in my thoughts about what the monument might look like. Draft design A (below), drawn by James Knox, is a rough concept of one possibility that emerged from my initial inspiration and considerations.

Design A (Concept by James Knox)

An aerial view of this potential design would show a peace symbol surrounded by a blue circle. Side views would reveal the twelve facets of the symbol. As one’s eyes move skyward, the monument’s dimensions would gradually reduce in size to form a spire. There could be space to walk through the structure where additional quotations and electronic kiosks would be located.

When the US Peace Memorial is built on the National Mall as planned, only officials in government aircraft allowed to fly over the area will see the aerial view of the peace symbol. That could be particularly effective in advocating for peace to our elected officials who might not otherwise be reached so directly.

As designed, the height at the peak would be 199 feet. By comparison, the Washington Monument is 555.5 feet tall. The circle of the peace symbol has an outside diameter of 150 feet and an inside diameter of 110 feet. The circular walkway would be finished in deep blue ceramic or porcelain tile. Like the Washington Monument, the Peace Memorial could have a white marble exterior and an aluminum cap. However, to save resources and reduce maintenance, the foundation is open to considering modern alternative materials such as photocatalytic concrete. This self-cleaning technology may be considered due to its property of removing contaminants and the effects of pollution.

Founding Members have already submitted drawings based on

my initial thoughts. Two are shown below. 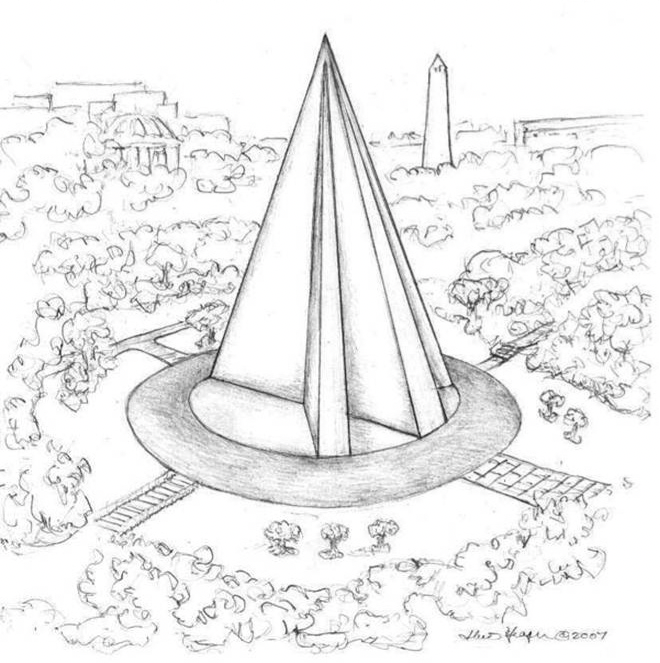 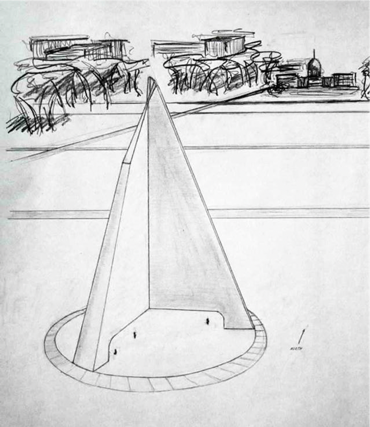 Other supporters, artists, engineers, and architects are encouraged to submit their ideas. Below are two creative design ideas (B and C) contributed by James Knox. Both concepts have plenty of surface area for honoring Americans who have worked to end war. Hopefully these drawings will stimulate your creativity and we will have a competition with many submissions.

Design B (Concept by James Knox)

National monuments are expensive to design, build, and maintain. More than twenty-five years in the making, The Martin Luther King Jr. Memorial was finished in 2011. It cost $120 million to build. The realization of the US Peace Memorial as a physical structure will depend on how quickly sufficient donations are received. At some point the Foundation will petition Congress to support setting aside public land on the Washington Mall for construction. If efforts to secure a location on the Mall fail, other sites and private land will be considered. A highly visible site in the nation’s capital is deemed to be most desirable.

The target date to begin construction has been arbitrarily set as July 4, 2026. This is a very ambitious goal as progress is dependent on many factors including gathering approvals, fundraising success, garnering public support, final design, and completing numerous other activities. If the Peace Memorial is to be built on the mall, the Foundation will need to secure approvals from the National Capital Planning Commission, the Commission of Fine Arts, and the National Capital Memorial Commission. But first, the Foundation must raise millions of dollars to develop and build the monument and guarantee its perpetual maintenance. We need to make the public aware of the project and to recruit additional Founding Members.

The Memorial will serve as a shared public symbol to remind all who visit— both U.S. citizens and guests from around the world—that many Americans value peace. Visiting the monument will be an educational experience, providing examples of peace advocacy and antiwar actions. Ultimately, visitors will have the opportunity to recognize, engage in, and internalize this important cultural value so that it becomes reinforced as a part of our public consciousness and discussion. The monument venue will provide teaching opportunities that could help change U.S. culture and foreign policy by making us more aware of, and more comfortable with, our rich history of antiwar activity and peace advocacy. It will be dedicated to those who have opposed war or proposed peaceful alternatives to U.S. aggression.

As the US Peace Memorial is currently envisioned, twelve walls, or facets, will contain engraved peace quotes from famous Americans such as Jane Addams, Muhammad Ali, Albert Einstein, Benjamin Franklin, Ernest Hemingway, Helen Keller, Martin Luther King Jr., and Margaret Mead, in addition to a variety of U.S. presidents who are not widely known for their antiwar statements. We will select strong, sometimes shocking, antiwar quotations that will surprise and enlighten visitors and help them understand that it is socially acceptable to speak out against war. Visitors will learn that American leaders from all walks of life have opposed war.

The first tier of quotations will be easily visible from ground level and will include statements from Americans whose fame and thoughts are likely to stand the test of time. Quotes from lesser-known figures may be displayed higher up on the monument, where they could easily be viewed with a small telescope or binoculars. Quotations currently under consideration are included on our website at www.uspeacememorial.org/Quotes.htm, where they are fully referenced. Digital projection mapping may be used to display quotes or other media directly onto the monument, providing elements of movement and life. This technology can be used to provide future enhancements and changes to the monument that will encourage multiple visits.

Electronic recognition kiosks will be strategically placed on and around the monument. Using voice commands, the kiosks will have direct access to the US Peace Registry and all data and links that it contains. The kiosks will also display acknowledgements of the Founding Members at all levels, whose generous philanthropy will make this project possible.

The experience will be interactive. Imagine a grandmother taking her granddaughter to explore Washington, DC. They step up to the monument and she says, “Let’s see what grandma did for peace.” The grandmother states her name at the kiosk and, when her information appears on the screen, she becomes an instant role model for the young person. They can review antiwar activities together; perhaps read articles and see videos of different actions in which the grandmother was involved. This could become a formative experience that the granddaughter will never forget. It could be the highlight of her trip to our nation’s capital. And this scenario could be repeated many times a day as peace proponents share the US Peace Memorial with their families and friends.

Alternate methods such as a smartphone app could be used to interact with the monument as a replacement for or to supplement in-place physical kiosks. This app and/or the kiosks could additionally interface with projection mapping technology to display material that the user is looking up and then present it on the monument.

Donations to the Foundation are tax deductible to the extent provided by law.

Florida registration #: CH20094. A COPY OF THE OFFICIAL REGISTRATION AND FINANCIAL INFORMATION MAY BE OBTAINED FROM THE FLORIDA DIVISION OF CONSUMER SERVICES BY CALLING TOLL-FREE (800-435-7352) WITHIN THE STATE. REGISTRATION DOES NOT IMPLY ENDORSEMENT, APPROVAL, OR RECOMMENDATION BY THE STATE.