by Honoring Americans Who Work for Peace

(All proceeds from the sale of this book go directly to the US Peace Memorial Foundation, a tax-exempt 501(c)(3) organization.)

This 2021 book makes the case for ending our war culture by honoring the actions of role models for peace to inspire other Americans to work to stop war. 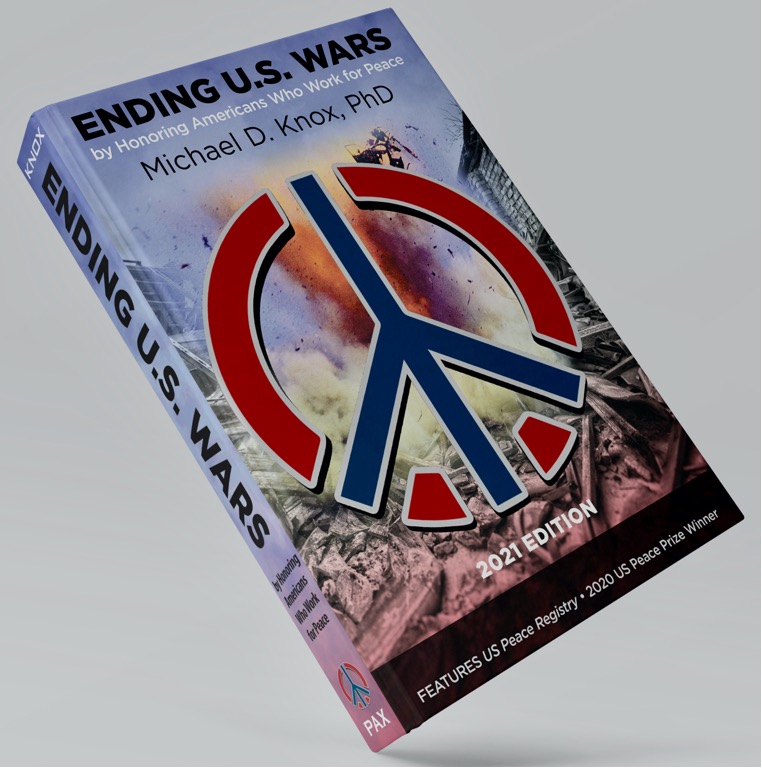 CounterPunch - “Imagine a Culture of Peace”

“In today’s America, objecting to the glorification of war—and the warriors—is tantamount to blasphemy. Michael Knox takes this on in a unique fashion, by honoring those who have committed their lives to building a culture of peace. With Knox’s view of war as a disease and peace as the cure, his beautifully crafted book represents a critical dose of preventive medicine.”—Medea Benjamin, CODEPINK Women for Peace

In this new book, Dr. Michael D. Knox, founder of the US Peace Memorial Foundation and Distinguished University Professor, says it’s time for Americans who work for Peace to be honored as national heroes. From war epics that portray American soldiers as unfailingly noble, to public monuments that glorify war-makers, to a national education curriculum that rarely asks students to debate the value of war, the U.S. is a nation that venerates its warriors above all others.

The U.S. has bombed thirty countries since the end of World War II, killing millions of people, maiming tens of millions more, disrupting and destroying education, healthcare, housing, businesses, infrastructure, the environment, and creating untold numbers of refugees. Knox, who practiced clinical psychology for over 40 years, describes a behavioral approach to ending U.S. war. By focusing on and documenting the actions of hundreds of role models for peace, he hopes to inspire other Americans.

ENDING U.S. WARS by Honoring Americans Who Work for Peace aims to change the U.S. culture to one that celebrates its peacemakers. “In a culture that funds and esteems war-making, respect for peacemaking must be taught and modeled. We can change our cultural mindset so that it will no longer be acceptable to label those who speak out against a U.S. war as disloyal, anti-military, or unpatriotic. Rather,” says Knox, “they will be recognized for their dedication to a noble cause and to saving lives.”

THE US PEACE PRIZE. Recipients of the US Peace Prize since 2009 include Chelsea Manning, Medea Benjamin, Noam Chomsky, Ajamu Baraka, Dennis Kucinich, and Cindy Sheehan. In 2020 the US Peace Prize went to Christine Ahn “for bold activism to end the Korean War, heal its wounds, and promote women’s roles in building peace.” Detailed profiles of all 12 recipients are included.

THE US PEACE REGISTRY. A collection of 270 American individuals and organizations who work for peace, demonstrating a broad range of peace and antiwar actions and activities. The Registry appears for the first time in print.

THE US PEACE MEMORIAL. The Foundation’s most ambitious goal is to establish a monument on the National Mall. ENDING U.S. WARS offers a sneak peek at this exciting project. Plans include an inspiring and creative design that features a peace sign that can only be seen aerially and aims to serve as a reminder to government officials who fly over the Mall. As the US Peace Memorial is currently envisioned, twelve walls, or facets, will display engraved peace quotes from famous Americans such as Jane Addams, Muhammad Ali, Albert Einstein, Benjamin Franklin, Ernest Hemingway, Helen Keller, Martin Luther King Jr., and Margaret Mead, and a variety of U.S. presidents who are not widely known for their antiwar statements. Until it is built, this book is the US Peace Memorial.

Praise for ENDING U.S. WARS by Honoring Americans Who Work for Peace

“The US Peace Memorial Foundation, honoring those who devote themselves to pursuit of peace, is a very welcome initiative, directing attention to what the world badly needs. I hope you will join in supporting it.”—Noam Chomsky

“We are desperately in need of voices that are convinced that law is better than war. Dr. Michael Knox has been a champion for peace for many years. His new book can help move the world toward a more humane and peaceful future.”—Benjamin B. Ferencz, Nuremberg war crimes prosecutor

“Americans are subjected to war propaganda from their schools, the media and even their religious institutions. Michael Knox tells us how to cultivate a culture of peace by giving recognition to those who work to end wars. This effort is long overdue.”—Margaret Kimberley, Black Agenda Report

“Many years ago, Michael Knox saw a need in this violent empire of the USA for a memorial to peace workers in a country where war is glorified and recklessly memorialized. I was honored to be the first recipient of the US Peace Prize and do highly recommend this book as a furtherance of Michael’s quest for peace. I hope it inspires the next generation of peace workers.”—Cindy Sheehan, mother of Casey Austin Sheehan, KIA Iraq: 04/04/04.

“An indispensable tool to overcome the culture of militarism that impoverishes human needs at home while creating endless wars, failed states, and boundless misery abroad. Dr. Knox challenges the pathology at the heart of the U.S. empire by providing a blueprint for amplifying the voices of antiwar heroes through a national peace memorial. A critical piece of the uprising for people, planet, and peace.”—Jill Stein

“This book powerfully makes the case for shifting from a culture that honors war to one that honors peace-making, but is principally devoted to concrete examples of how to do it, including through rewarding those who work for peace and creating a public peace monument.”—David Swanson, World BEYOND War 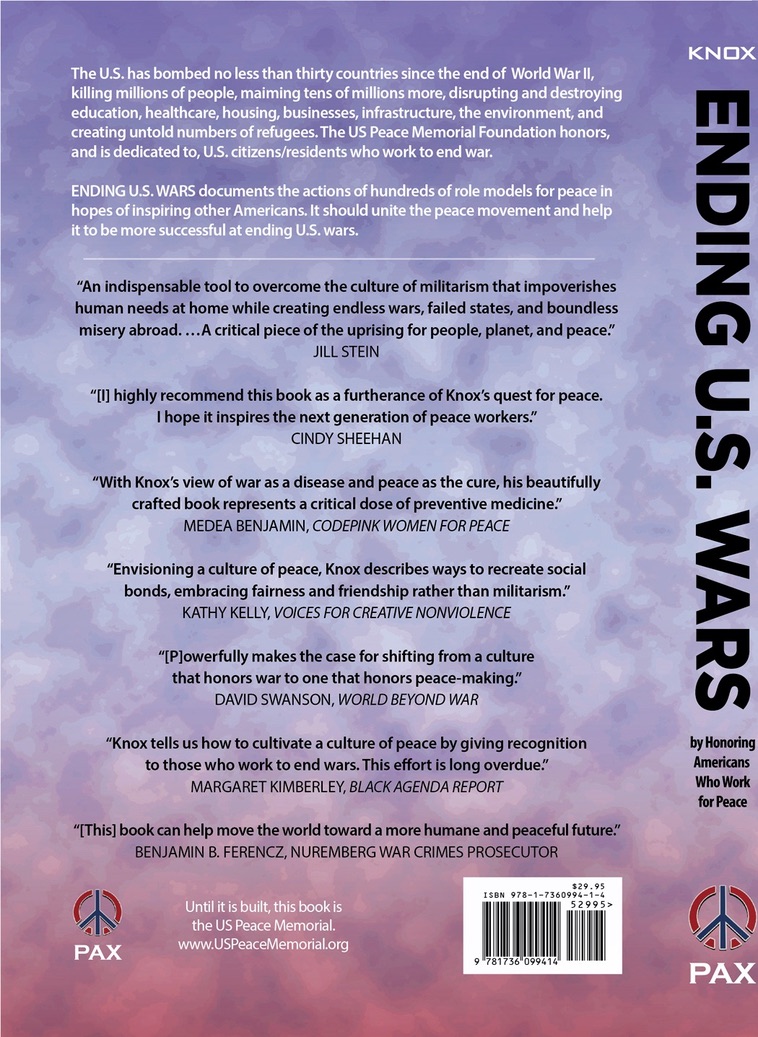 Chapter 1: A Culture of War

U.S. Wars Since the End of World War II

Chapter 2: A Culture of Peace

Toward a Culture of Peace

US Peace Memorial Foundation is a tax-exempt 501(c)(3) public charity.

Donations to the Foundation are tax deductible to the extent provided by law.